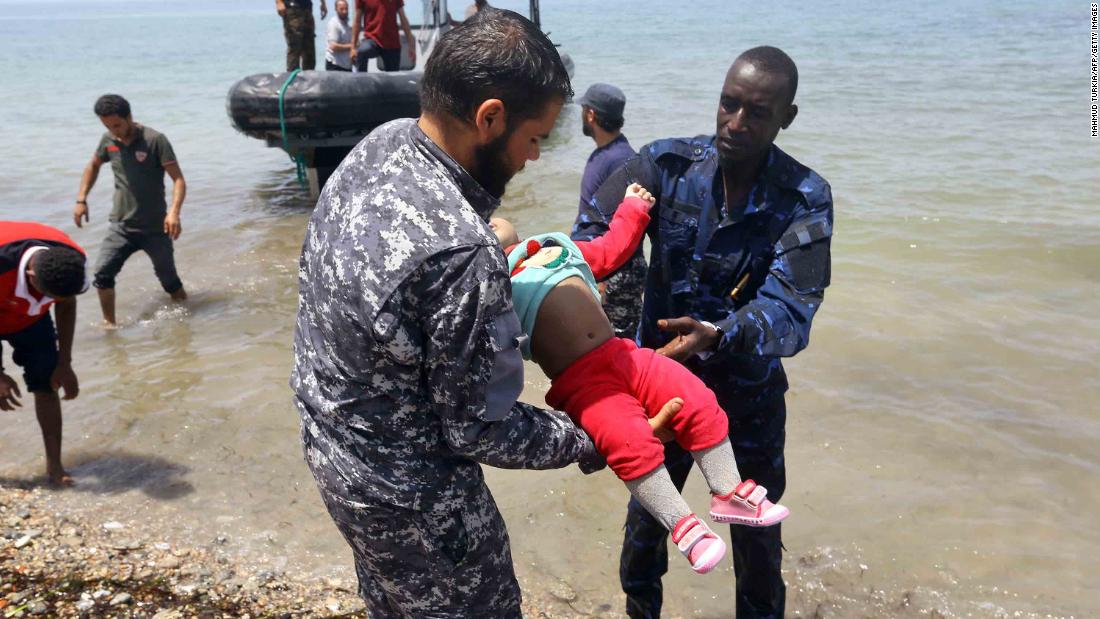 Members of the Libyan security forces carry the body of a baby ashore east of the capital Tripoli.

The lifeless bodies of three babies, dressed in brightly colored clothing and looking almost as if they were sleeping, were carried carefully ashore Friday in Libya.
Held in the outstretched arms of three men close to the water’s edge, one of the babies was still wearing sneakers, fastened shut with pink Velcro straps, another with red socks that matched a pair of red and white dotted pants and the third barefoot, partially wrapped with a makeshift covering. 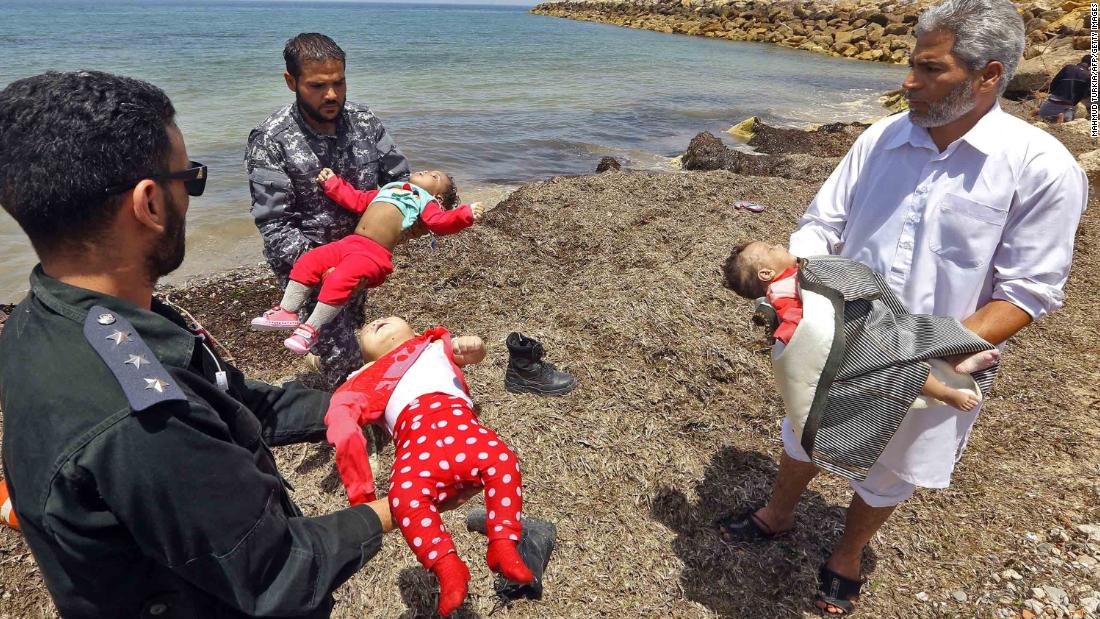 The three babies were among dozens of people on a rubber boat.
They were the latest victims of the migrant crisis, their young lives lost as a rubber boat carrying desperate migrants seeking a better life capsized off the north Africa nation’s coast. A hundred or more people are dead, a spokesman for the UN migration agency, the International Organization for Migration, said in a tweet.
The news came just hours after European Union leaders hailed a new deal on migration that could see more migrants prevented from making the Mediterranean crossing — if it can be made to work.
Read More
Hundreds of people have already lost their lives this year attempting the perilous Mediterranean crossing, according to the IOM. 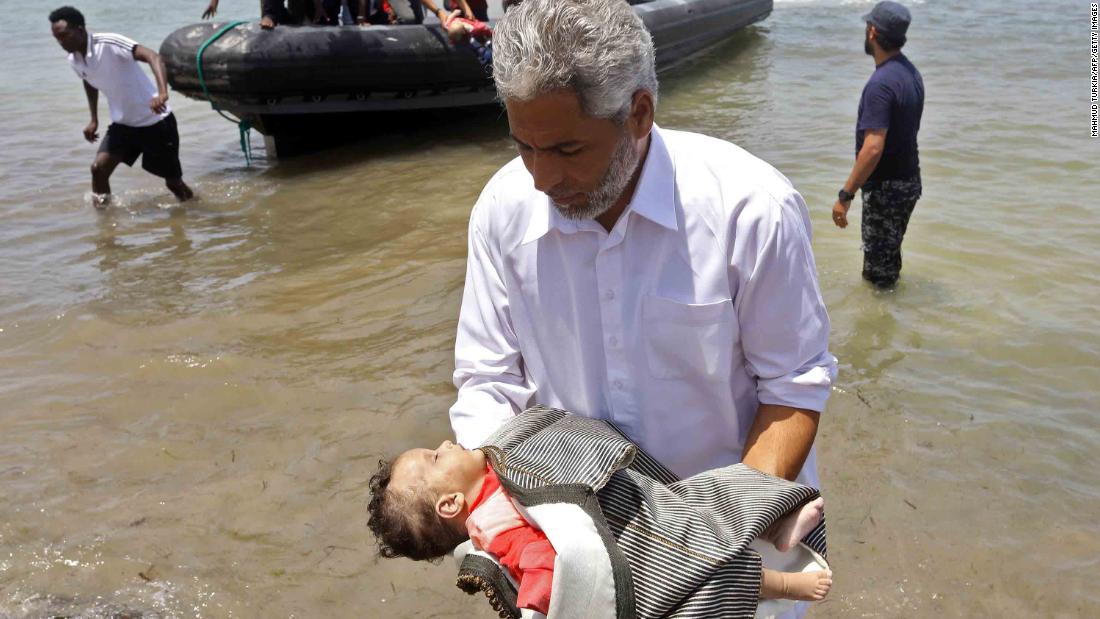 A man carries the body of one of the three babies. 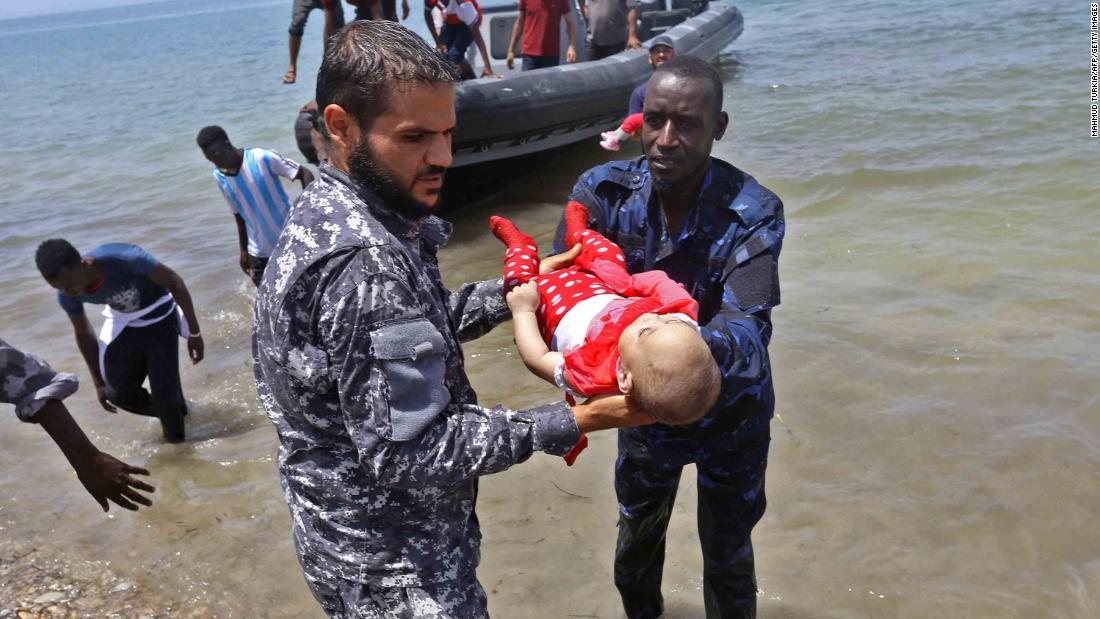 Survivors arrive on shore as two men hold the body of one of the three babies.
Meanwhile, EU leaders have squabbled over taking responsibility for migrants rescued at sea and vowed to strengthen Europe’s external borders.
Only 14 migrants had been rescued after the boat capsized Friday, the IOM said, as the rescue operation was ongoing.
“The bodies of three children under the age of five have been retrieved. How many missing or dead total, we don’t know for now,” IOM spokeswoman for Libya, Christine Petre, told CNN.
Doctors are providing medical assistance on site, and additional staff have been deployed, Petre said. “IOM is providing humanitarian direct assistance at the disembarkation point, including water and food,” she said.
Separately, an estimated 345 migrants were returned Friday to Libyan shores by the Libyan coast guard, IOM said.
Close to 10,200 migrants have been taken back to Libya so far in 2018, Petre said. More than 2,000 were returned by the Libyan coast guard last week.

Aid group Doctors Without Borders, or Médecins Sans Frontières, urged EU leaders Friday to “show some basic decency” by committing to search and rescue operations for those in trouble at sea — and then taking them to a place of safety, rather than Libya.
“EU member states are abdicating their responsibilities to save lives and deliberately condemning vulnerable people to be trapped in Libya, or die at sea,” said Karline Kleijer, head of emergencies for the aid group.
“They do this fully aware of the extreme violence and abuses that refugees and migrants suffer in Libya.” 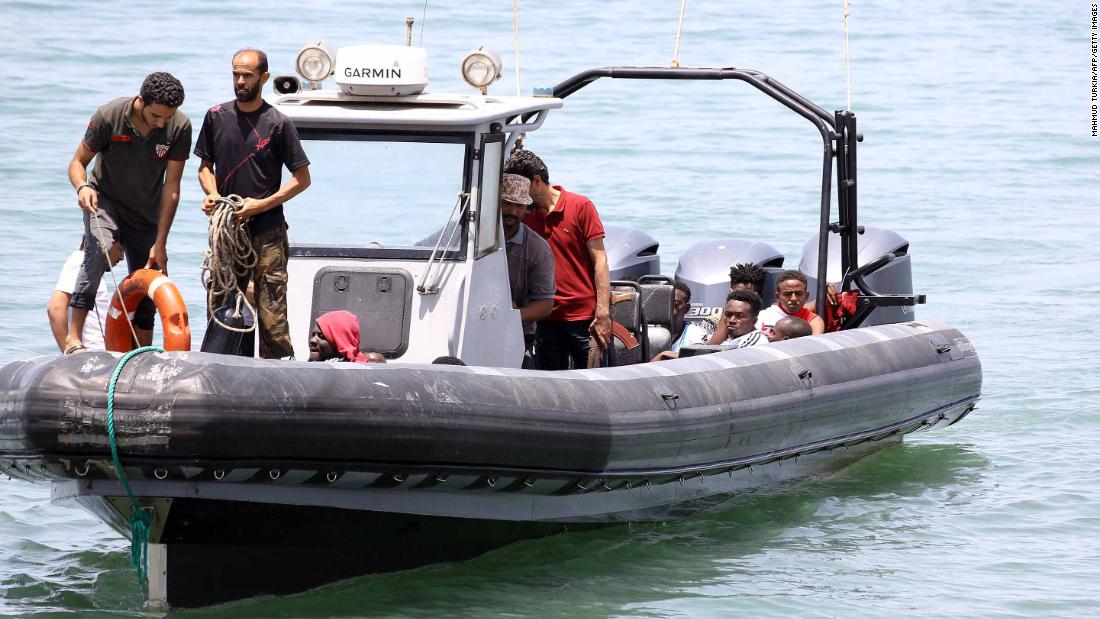 Migrants who survived the sinking of an inflatable boat off of the coast of Libya are brought ashore east of the capital, Tripoli, on Friday. 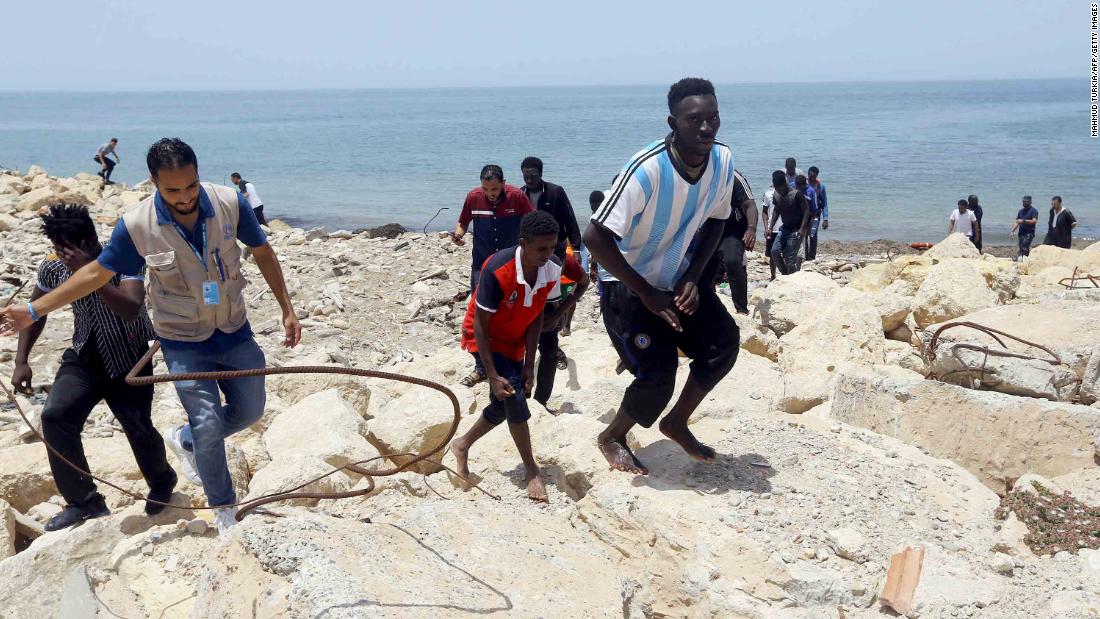 Migrants who survived the sinking climb the rocky shore of al-Hmidiya, east of the capital Tripoli.
Libyan deportation centers are rife with abuse, rights groups say, and a CNN undercover investigation last year revealed cases of migrants being sold at slave auctions.
Italy’s new populist government has stirred controversy this month by closing its ports to ships rescuing migrants from the Mediterranean.
Italian Prime Minister Giuseppe Conte welcomed the European Council deal Friday, saying it took “long negotiation, but from today Italy is no longer alone.”
Oscar Camps, president of the Spanish NGO Proactiva Open Arms, complained that the Italian coast guard did not call on a rescue boat his organization had in range to assist the migrants, as it had in the past.
“Today 100 people died in the Med. We are outraged, not only for the deaths of these people, but because they didn’t use the rescue boats in the area. The Open Arms has been here for many days, and neither Italy, nor anyone else, is using our capabilities,” he said.
“We did it in the past — we intervened at seven miles from the Libyan coast to assist with a shipwreck — we have done so many operations under the coordination of the Italian coast guard. But suddenly, they ignore us, they don’t call us, and people keep dying a few miles away from us. This is a shame and someone needs to take responsibility for this. We are not here to obstruct the work of the coast guard. We are here to collaborate so that people don’t die in the sea.”

Under the deal agreed early Friday at the European Council summit in Brussels, the European Union will look into setting up migration centers in countries outside Europe to assess migrants’ claims for protection as well as secure centers on European soil.
The proposed “regional disembarkation platforms” would be in North African nations such as Libya, with the aim of breaking the business model of human traffickers who ship migrants across the sea to Europe. However, it’s not yet clear whether those countries are able or willing to operate such a system.
EU leaders also agreed to intensify efforts to stop smugglers operating out of Libya or elsewhere, including greater support for the Libyan coast guard and for the Sahel region, through which many migrants from sub-Saharan Africa travel on their way north.
Related: Merkel is saved for now, but Europe hasn’t solved its migration problem
In addition, the deal includes more money for Spain and Morocco to stem migrants coming through the eastern Mediterranean route.
Despite the dangers, thousands of migrants — many fleeing conflict, poverty or oppression — continue to risk their lives on overcrowded and barely seaworthy boats in the hope of finding a better life on European shores.
While illegal border crossings into the EU have decreased by 95% from their peak in October 2015, there has been a recent uptick in certain routes across the Mediterranean, the European Council said.
As of June 6, some 33,400 migrants and refugees had reached Europe by sea this year, IOM said, most of them arriving through Greece, Italy and Spain. The estimated number of deaths stood at 785.

Chat with us in Facebook Messenger. Find out what’s happening in the world as it unfolds.

Save Settings
Allow All