Italy’s deal with Libya to ‘pull back’ migrants faces a legal challenge.

Stephanie Kirchgaessner in Rome and Lorenzo Tondo in Palermo

This article is over 1 month old

Italy’s collaboration with Libya to stop migrants reaching Europe is facing a legal challenge over allegations that it has led to grave human rights violations against those crossing the Mediterranean, including torture and slavery.

A lawsuit filed in the European court of human rights (ECHR) alleges that Italy’s work with the Libyan coastguard, which has stopped migrant boats at Italy’s behest and forced thousands of people to return to Libya against their will, has subjected them to inhumane conditions, beatings, rape and starvation.

The lawsuit, based on the account of 17 survivors of a boat sinking who were taken back to Libya, could pose a serious threat to a deal struck last year between Italy’s centre-left government and Libya. It was endorsed by European leaders and has been credited with dramatically lowering the number of migrants arriving on Italy’s southern coast.

Under the terms of the deal, Italy agreed to train, equip and finance the Libyan coastguard as part of its effort to turn back vessels and return migrants to Libya.

The case brought by the UK-based charity Global Legal Action Network centres on an incident on 6 November 2017 in which the Libyan coastguard allegedly interfered in attempts by an NGO vessel to rescue 130 migrants from a sinking dinghy.

About 20 people died in the incident. Survivors were “pulled back” to Libya, according to the lawsuit, where they endured detention and extreme violence in inhumane conditions, with two survivors being “sold” and electrocuted.

“They are putting migrants’ lives at risk and exposing them to extreme forms of ill treatment by pulling them back to Libya by proxy,” said Itamar Mann, a legal adviser. “We hope this new case will serve to establish the key principle that so-called ‘pull-backs’ are contrary to basic human rights standards.”

For migrants and human rights activists, the legal challenge may represent the biggest hope for change. It comes six years after the ECHR found that a similar deal – agreed between Silvio Berlusconi, then the Italian prime minister, and the Libyan leader Muammar Gaddafi – violated human rights laws. The deal was later suspended.

The current Italy-Libya deal has led to clashes between NGOs that cross the Mediterranean on rescue missions and Libyan authorities.

In some cases, the NGOs have allegedly been threatened with violence if they did not turn over migrants on their vessels who had been rescued, with the Libyan authorities demanding that they be taken back to Libya instead of Sicily, even if the vessels were in international waters.

In one case, a man named Chica Kamara, 27, who left Sierra Leone with his 10-year-old son, Alfonsine, in early 2017, was separated from him after a dinghy they were on was caught between a cargo ship and Libyan authorities. Kamara was pushed into the sea while Alfonsine remained in the dinghy and was taken by the Libyans.

“I left Sierra Leone because of my son and now he is stuck in Libya. I know he was safe and alive until two weeks ago, but now I don’t have any news from him,” he said.

In another case, Libyan authorities allegedly threatened to kill rescuers aboard the NGO rescue ship Open Arms if they did not hand over rescued migrants to the Libyan authorities. The crew refused and were met by Italian police upon their arrival in Sicily, where prosecutors are now investigating whether charges should be brought against the ship’s captain and coordinator for enabling illegal immigration.

Ten migrants who recently arrived in Italy through Libya told the Guardian they had endured forced labour and torture, including one man who said he had been set on fire after being held captive for two years.

“Libya is the worst place on earth. If you are a black African in Libya, they automatically consider you a slave,” said Ibrahim Diallo, 20, from Gambia, who is now in Catania. “There are cities like Sabha or Zawiyah that are made for slaves. Prisons and detention camps one after the other. I would rather die than go back to Libya.”

But even if thelegal challenge does eventually force Italy’s hand, it will not end the political gridlock that has gripped Europe and largely left Italy alone to deal with the arrival of tens of thousand of migrants over the last few years. 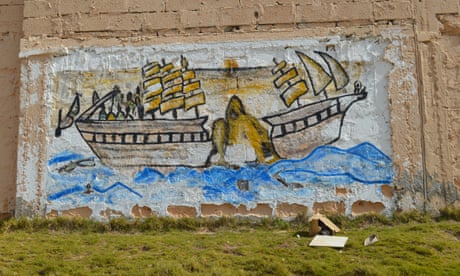 In the 2012 ECHR ruling, the court said it was aware of the pressure states were under due to the increasing influx of migrants but that it did not absolve the state of its obligation to protect individuals who ran the risk of torture and death in another country. The Berlusconi-era “push back” policy called for Italy to invest a total of $5bn into Libya, including the construction of a new highway, in exchange for tougher security measures and joint maritime patrols.

Amnesty International estimates that about 20,000 people were intercepted by the Libyan coastcuard in 2017 and taken back to Libya.

The application was filed by the Global Legal Action Network and the Association for Juridical Studies on Immigration, with support from the Italian non-profit ARCI and Yale law school’s Lowenstein International Human Rights Clinic.

Their submission made use of evidence compiled by Forensic Oceanography, part of the Forensic Architecture agency based at Goldsmiths, University of London, who have produced a detailed reconstruction of the incident.

… we have a small favour to ask. More people are reading the Guardian than ever but advertising revenues across the media are falling fast. And unlike many news organisations, we haven’t put up a paywall – we want to keep our journalism as open as we can. So you can see why we need to ask for your help. The Guardian’s independent, investigative journalism takes a lot of time, money and hard work to produce. But we do it because we believe our perspective matters – because it might well be your perspective, too.

I appreciate there not being a paywall: it is more democratic for the media to be available for all and not a commodity to be purchased by a few. I’m happy to make a contribution so others with less means still have access to information. Thomasine, Sweden

If everyone who reads our reporting, who likes it, helps fund it, our future would be much more secure. For as little as £1, you can support the Guardian – and it only takes a minute. Thank you.