Libya migrant centres near breaking point after spike in arrival

The number of migrants in Libya’s overcrowded detention centres has almost doubled over the past three months, according to the UN’s migration agency.

Amid a crackdown on Mediterranean crossings by the Italy and EU-backed Libyan coastguard, the number of people being held has swollen from 5,000 to 9,300, with thousands more at the mercy of smugglers in charge of unofficial detention facilities, the International Organization for Migration (IOM) said.

The figures were revealed as one group accused the Libyan coastguard of failing to assist with the rescue of three people in the Mediterranean, after intercepting a boat carrying 160 people bound near Libya’s coastline. Proactiva Open Arms, a Spanish search and rescue organisation, said it had found one woman alive and another dead, alongside the body of a toddler, amid the drifting remains of a destroyed migrant boat.

Two weeks ago, more than 200 migrants drowned in the Mediterranean in three days, taking the death toll this year to more than 1,000 and sparking fears that smugglers are taking greater risks with the lives of those trying to reach Europe.

Othman Belbeisi, the chief of mission in Libya at the IOM, said the situation has never looked so bleak. The growing number of migrants intercepted by the coastguard had led to overcrowding in detention centres, he said.

Migrants stranded in Libya face a greater danger of being trafficked or exploited because of the absence of law enforcement in the country after the overthrow of leader Muammar Gaddafi seven years ago.

Smuggling networks are “becoming more organised and stronger”, said Belbeisi, who pointed out that “less people travelling to Europe or taking boats does not mean that there are less migrants. It means the opposite. They are stranded.”

A controversial deal by Italy and the EU to train the Libyan coastguard to intercept boats and return migrants to Libya has led to a dramatic drop in arrivals. But human rights activists have criticised the assistance, saying migrants returned to Libya are at risk of beatings, abuse, sexual violence and slavery.

Belbeisi said overcrowding in detention centres would continue as long as the Libyan coastguard automatically sent migrants back to detention.

“The more [the] Libyan coastguard rescues people without a change in the policy where rescued migrants will be automatically sent back to detention, [the more] we will have overcrowding in detention centres.”

Belbeisi said: “Working with the Libyan coastguard, we see the good and the bad. We need to support those who are doing a good job and we need to be prosecuting anyone who commits human rights violations.”

The IOM is calling for registration of migrants on disembarkation to allow nationalities and migrant flows to be recorded more accurately.

William Lacy Swing, the head of the IOM, recently appealed to the Libyan authorities to stop detaining migrants.

The Libyan government is believed to have closed 25 detention centres. However, there are also a number of unofficial detention centres, run by militia in the country. There have been reports of armed groups taking migrants from the streets and forcing them into unpaid work, and of migrants being sold from one group to another. 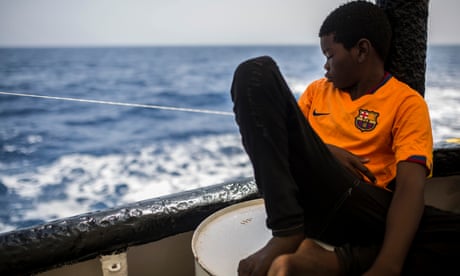 The IOM said on Tuesday that the number of migrants and refugees who have arrived in Spain by sea this year has overtaken those who have reached Italy. A total of 18,016 migrants arrived in Spain up to July 15, while 17,827 people landed in Italy during the same period.

The IOM has estimated that 1,443 people have died or gone missing in the dangerous Mediterranean route up to July 15 this year.

… we have a small favour to ask. More people are reading the Guardian than ever but advertising revenues across the media are falling fast. And unlike many news organisations, we haven’t put up a paywall – we want to keep our journalism as open as we can. So you can see why we need to ask for your help. The Guardian’s independent, investigative journalism takes a lot of time, money and hard work to produce.

The Guardian is editorially independent, meaning we set our own agenda. Our journalism is free from commercial bias and not influenced by billionaire owners, politicians or shareholders. No one edits our Editor. No one steers our opinion. This is important because it enables us to give a voice to the voiceless, challenge the powerful and hold them to account. It’s what makes us different to so many others in the media, at a time when factual, honest reporting is critical.

If everyone who reads our reporting, who likes it, helps to support it, our future

After enduring trauma, sexual violence and slavery in Libya, migrants returning to Cameroon struggle to get their lives back on track
African migrants report slavery, torture in 99% Muslim Algeria