A growing number of indigenous Mexicans are being detained by agents looking for Central American migrants, amid a crackdown driven partly by aid from US

Amy and Esther Juárez were edgy with excitement as they boarded the bus full of seasonal workers heading for a farm at the other end of Mexico from their home in the poverty-stricken southern state of Chiapas.

Although their brother Alberto,18, had made the same journey the previous year, it was the first time Amy, 24, and Esther, 15, had left the tiny indigenous community where they had grown up.

But about half-way there, immigration agents boarded the bus, and after checking all the passengers’ papers, ordered the three siblings to get off.

The officials accused them of carrying false documents and lying about their nationality. Then they told the youngsters that they would be deported to Guatemala, a country none would have been able to place on a map.

The baffled youngsters – who speak the Mayan language Tzeltal but very little Spanish – were transferred to an immigration holding centre in Queretero city.

Alberto, 18, was taken into a separate room by four agents who told him that unless he signed documents admitting he was Guatemalan, would die there.

“One pushed me, another was kicking my leg, and a third who was very fat gave me an electric shock here, on the back of my right hand,” Alberto told the Guardian through a translator.

“I really thought I was going to die, so I signed lots of sheets of paper – but I can’t read or write so I didn’t know what I was signing.”

The three siblings were held for eight days before a lawyer from an activist group filed a legal complaint and eventually secured their release.

A growing number of indigenous Mexicans are being detained and threatened with expulsion by immigration agents looking for undocumented Central American migrants.

The trend comes amid a crackdown on migrants driven in part by political pressure and financial aid from the US. Deportations have already risen exponentially since summer 2014 when Barack Obama declared the surge in Central American child migrants a humanitarian crisis. Campaigners say that Mexico migration officials are running a secret quota system to increase the number of expulsions.

Activists say that Mexico’s National Immigration Institute is increasingly operating like an unchecked police force – and say that that like the country’s security forces, it appears to be systematically using torture against detainees.

“The order appears to be to detain Central Americans at any cost, even if that means violating the constitution, picking up people based on racist criteria and detaining and deporting Mexican indigenous youth along the way,” said Gretchen Kuhener, director of the Institute for Women in Migration (IMUMI), which launched legal action to secure the siblings’ release. The Mexican constitution states that citizens can move freely within the country, and do not need to carry ID.

Kuhener added: “This case demonstrates the power and impunity of the National Migration Institute. They can get away with it because it impacts highly vulnerable populations who may not speak Spanish, don’t know their rights, and are unlikely to complain.”

The Juárez family live amid the picturesque rolling hills in eastern Chiapas, where all seven children – aged six to 24 – help their parents eke out a living from a few plots of land.

Food is plentiful, but money is scarce, and to top up their incomes, thousands of people, many of them indigenous, travel by bus from Chiapas and other southern states to work on farms in northern Mexico.

In Chiapas, casual farmhands earn 60 to 80 pesos (£2.40 to £3.20) a day cutting coffee, whereas last season Alberto earned 200 pesos (£8) a day harvesting squash, watermelons and tomatoes in the northern state of Sonora.

Gently swinging in a hammock, Alberto said his first time away from home was thrilling.

“We worked hard, but went out every evening. I tried hamburgers for the first time, and there was electricity where we lived. When I came home after seven months, I bought a horse with the money I’d saved. This year I wanted to buy motorbike.”

Encouraged by Alberto’s stories, his sisters and Esther’s boyfriend Fernando, 27, also signed up when the contractors returned looking for workers. All four asked not to be identified by their real names, for fear of reprisals from the Mexican authorities.

“I just wanted to have my own money so I could buy my own clothes at the market, maybe some earrings,” said Amy, 24. “But even as we got on the bus, I had a bad feeling.”

The privately contracted bus left on 2 September 2015 at 2pm from the local petrol station. The following afternoon, at a tollbooth just south of the border with Queretaro state, immigration agents boarded the bus.

Mobile immigration teams were introduced as part of the crackdown – known as the Southern Border Plan – launched amid US pressure to stop Central American migrants reaching its border.

Although immigration officials do not carry weapons, they often work closely with armed private security officers, police officers and soldiers. The joint units have been aggressive in their attempts to stop northward migration, raiding bus stations, motels and buses, and stopping migrants from boarding the freight train known as the Beast, which was once a major route through southern Mexico.

The scale of US financial support for Mexican immigration control is opaque. At least $100m has been spent or pledged for training, new equipment and canine teams, according to Congressional Research Service. There are no human rights conditions attached to this aid. Department of Defence aid is separate and unknown. The INM said it has “never received a peso” from the US.

After being held at the roadside for several hours, the Juárez siblings were driven to the immigration centre. Officials confiscated their belongings, including a cellphone and documents (birth certificates, social security numbers, electoral registration) which the officials insisted were fake.

Months later, the siblings are still shaken by the experience, and asked to be identified with pseudonyms for fear of retribution from migration officials

Esther, 15, said the experience was terrifying. “They kept saying we were Guatemalan, and we kept telling them no, we’re from Chiapas but they wouldn’t believe us and became angrier and angrier.”

On Friday 4 September, after being kicked, pushed and given an electric shock, Alberto signed documents he couldn’t read admitting he was Guatemalan.

Agents told them they would be deported to San Marcos, a poverty-stricken city in western Guatemala. Incredibly, a Guatemalan consul issued certificates “confirming” their nationality.

“Alberto couldn’t stop shaking, we were all crying. How would we return home to Chiapas when we don’t even know where Guatemala is?” added Esther.

Esther’s boyfriend Fernando, who was accused of being a people smuggler but not detained, managed to find help. The IMUMI lawyer arrived on 6 September, and filed a legal complaint, and after eight days, the trio were released.

Their ID documents were not returned because they could not pay the £8 (200 pesos) bribe demanded by officials.

A specialist psychologist and doctor from the Mexico City Human Rights Commission concluded – in a report seen by the Guardian – that Alberto had suffered serious physical pain and post-traumatic psychological symptoms as a result of being tortured.

Carolina Jiménez, deputy director of research for the Americas at Amnesty International, said: “We have documented a truly disturbing pattern of very serious human rights violations against migrants travelling through Mexico. But seeing immigration officials involved in torture against Mexican nationals to make them ‘confess’ they are migrants takes this disturbing situation to a whole more sinister level.”

Concern over the conduct of immigration agents is rising. Advocacy groups were dismayed when Ardelio Vargas, a highly controversial police figure, was named head of INM in January 2013. Vargas was in charge of federal forces when peasant protests in the town of San Salvador Atenco were violently repressed by police in 2006.

“The biggest mistake was to mix police and immigration. [The case of the Juárez siblings] makes me even more certain that illegal quotas within the institute are driving the exponential rise in detentions. It doesn’t matter how agents do it, as long as they meet the quotas.”

INM categorically denied the use of quotas. But the huge surge in detentions and deportations is undeniable. In 2015, 190,000 people were detained by INM agents – 120% more than in 2013.

It also appears Mexican nationals with a particular profile are being caught up in the swell.

The National Commission for Human Rights (known in Spanish as the CNDH) recently investigated 15 similar cases – including at least eight other victims from Chiapas – and found 22 immigration agents violated multiple rights. 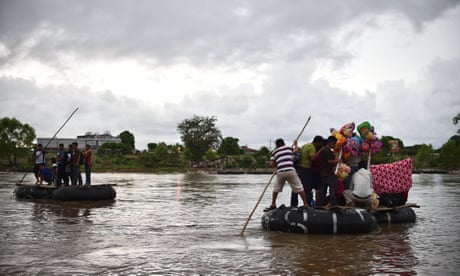 The victims were detained on buses or on the street solely based on their “physical features, clothes and appearance”. Some were detained for several weeks before convincing officials they were Mexican.

The INM said agents are legally permitted to request identification from anyone.

According to the INM spokeswoman, the Juárez siblings were detained because Fernando said they were Guatemalan, and the sisters’ ID papers raised concerns they could be human trafficking victims. Their detention was prolonged by IMUMI’s legal challenge, she said.

She added: “It’s impossible that anyone could be tortured at an immigration station because they are permanently monitored by the CNDH, international organisations like the Red Cross and NGOs. If he [Alberto] was tortured, why not report it at the time, why wait till later?

“As in all cases of possible abuse there will be an investigation and if we find any evidence of excessive force, those responsible will be reported to the competent authorities.”

A lawsuit over the case is still ongoing, but whatever its outcome, the episode has shattered the dreams of the Juárez siblings. Amy and Esther say they will never leave their community again because it is simply too dangerous.

Alberto muses over the future while watching his elegant white mare grazing with her chestnut foal. He had big dreams of building his own house with electricity and internet, and he still wants that motorbike.

“I want to go north again to work, but I keep thinking about what they did to me. It’s best that I stay here.”

… we have a small favour to ask. More people are reading the Guardian than ever but advertising revenues across the media are falling fast. And unlike many news organisations, we haven’t put up a paywall – we want to keep our journalism as open as we can. So you can see why we need to ask for your help. The Guardian’s independent, investigative journalism takes a lot of time, money and hard work to produce. But we do it because we believe our perspective matters – because it might well be your perspective, too.

I appreciate there not being a paywall: it is more democratic for the media to be available for all and not a commodity to be purchased by a few. I’m happy to make a contribution so others with less means still have access to information. Thomasine F-R.