THE EUROPEAN -AFRICAN SUMMIT ON MIGRATION IN ABIDJAN. 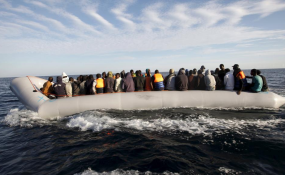 With an increasing number of migrants from Africa crossing the Mediterranean, the EU-Africa summit is going to be about forging a new kind of partnership to deal with this. But will it serve both sides’ interests?

Speaking days after the horrific details of the slave trade in Libya caused an international outcry, she said, “It’s very important that we simply support Africans to put a stop to illegal migration, so people don’t have to suffer in horrible camps in Libya or be traded.”

Meanwhile, Belgian Prime Minister Charles Michel has urged EU leaders to work more closely with Africa to deal with migration and security issues. He told the Associated Press news agency that he and the younger generation of leaders like French President Emmanuel Macron and Luxembourg’s Prime Minister Xavier Bettel, who are also attending the summit, must seize this opportunity to put Africa-EU relations on a new footing

“I come from a generation that sees Africa as a partner,” Michel said. “There is no more room in our generation for nostalgia about the past or a sense of guilt.”

Two years ago, when European and African heads of government met halfway on the Mediterranean island of Malta, the main issue up for discussion was how to deal with irregular migration. The agreements made at that time have only been partially honored — and this applies to both sides.

With EU leaders now travelling to Abidjan to meet with their African counterparts, there are hopes of forging more far-reaching goals. There are discussions about the need to create a new partnership that will recognize the differing needs of Europeans and Africans.

With Africa’s population set to double by 2050, the main objective for Europeans is to avert the threat posed by irregular migration by strengthening development and cooperation on the ground. Africans, on the other hand, are calling for EU policy development to recognize them as equals, and to be treated with respect as partners. It is a difficult balance.

“We must work together to solve our problems,” Antonio Tajani, president of the European Parliament, told DW. Tajani listed the main topics on the agenda: “Migration — this is a problem for both sides,” he said. Also to be discussed are the common issues of terrorism, youth unemployment and the consequences of climate change. Both Europeans and Africans are affected, he said, and must work hand in hand to find a way forward. This summit is not about providing a photo opportunity, he said, but about a real search for solutions.

In about 30 years, the population of Africa will be more than two billion. Tajani believes that if the problems facing Africa are not tackled now, millions of people will look to moving to Europe. As a result, a main focus of discussion in Abidjan is going to be about policies for dealing with Africa’s youth. Africa is already the youngest continent in the world and Tajani said that it “must be able to guarantee its young people a future.”

Tajani went on to say that a “Marshall Plan” must be drawn up, as discussed after the last G20 summit in Germany. The EU cannot perform miracles, he said, but it must do much more. Europe remains the largest development aid donor, having given €20 billion ($23.6 billion) last year. At the same time, African countries received around €21 billion from their citizens’ remittances to their homelands. That is one reason why many countries refuse to accept returning migrants when they are sent back from Europe — after all, they are good for business.

At €32 billion, however, the EU’s direct investment in Africa is relatively modest. The African side is hoping for significantly more money and involvement. Werner Hoyer, head of the European Investment Bank, has proposed creating a special bank for Africa, where loans and guarantees for projects could be pooled. This could raise the existing small-scale development cooperation to a new level. How quickly this will happen, however, and how much money the Europeans will really make available remains open — despite the grand statements about a Marshall Plan that would be supported by Germany, Italy, Spain and France.

Better governance as a basis for success

According to Denis Mukwege, a medical doctor and activist from the Congo, “Development aid without conditions often rolls out the red carpet for dictators. And we know very well that such people let their citizens starve, cheat in elections, change the constitution and lose all European respect, he told DW. But, he believes, democracy and good governance are not purely European concepts. They belong to mankind’s common heritage, which includes Africa, he said. And he went on to stress that future relations between Africa and Europe must be based on such values.

Mukwege has become famous through his work and commitment to women in the Congo who have been abused and mistreated on a massive scale in acts of war and unrest. He takes a very critical view of many African rulers: “If you look at some African countries today, their problems do not come from a lack of human or material resources, but from bad government.”

Mukwege believes that Africa must free itself from the role of being the eternal beggar. There is a link between peace, security and development, but this is only possible if there is an established basis of democracy and good governance, he said.

Europe and Africa must work on an equal footing

According to Ruffin Touadera, president of the Central African Republic, the vision for the future has changed. “The EU wants to work with African representatives now. It’s about creating a real partnership. The issues of Africa’s youth and the question of migration are directly related to the lack of development.”

He told DW that investment in education, agricultural productivity and water supply is needed. The president also said that young people must be given future prospects, because uncontrolled migration is a natural result of the current situation.

Touadera wants to attract direct investments from abroad in particular and admits that local conditions need to be improved. “We have our responsibilities, but we also need the support of our partners once we have made decisions together,” the president said. He fully supports the idea of a Marshall Plan for Africa, which could solve many of the continent’s problems through massive investments.

But the hope of fast and substantial financial commitments from the EU could be deceptive since so much of Africa is suffering from home-grown political crises, corruption and mismanagement. African countries are bringing high expectations to the summit. But Europeans are necessarily guarded about investing billions in insecure states. Any new partnership will entail a drawn-out process with many small steps along the way.

join coalition of civil society actors and specialists on the migrant and refugee crisis by signing the 2017 Geneva Declaration
NGOs urge United Nation High Commissioner for Human Rights ,to drive the human rights council beyond 2018.